Steven Broadbent, Commercial Director at EDI, searches on-line, with a degree of trepidation, for the mid-range weather forecast as he knows that spending a night sleeping outside during a cold, damp British autumn is a choice few people would make.  However The Wycombe Homeless Connection Big Sleepout will see Steven and approximately eighty other people do just that on Friday 18th November 2016.

“Irrespective of the weather this autumn and winter I am fortunate enough to know that sleeping outside, in the All Saints’ churchyard,  is just for one night.  There are people who, for whatever reason, don’t have a realistic choice about sleeping rough – for them it’s a fact of life.  Homelessness is a blight on our society and is something that, together, we can change.” says Steven. 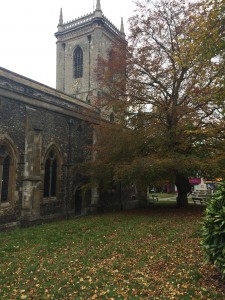 The Big Sleepout is a sponsored event to support Wycombe Homeless Connection’s (WHC) vital work. They help homeless people who do not qualify for council assistance and have nowhere else to turn. In the last year 400 individuals turned to WHC for help.

Steve explains his motivation for participating the The Big Sleepout:  “Our work at EDI takes us across the globe, especially to developing nations and, as a company, we aim to have a positive impact on people’s lives through our activities, but we also have to remember that problems remain at ‘home’ too.  Our UK offices are based in High Wycombe which is comparatively affluent and prosperous but by raising money and increasing awareness I aim to make a difference for those who are vulnerable and in need within this community too.”

Steven has a fundraising page which accepts donations to support the event and the money goes directly to the charity.  You can access the page and provide support here: http://uk.virginmoneygiving.com/StevenBroadbent1

UPDATE:  Steven slept out and the temperature reached freezing point; which made it quite a challenge.  Here he is in his self-constructed shelter: 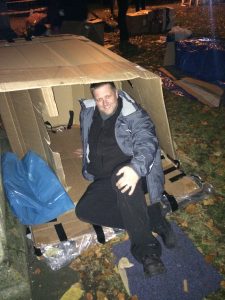