In 2016, only 33% of households in mainland Tanzania were connected to some form of electricity (17% in rural areas and 65% in urban areas) (The United Republic of Tanzania, 2017). These figures perfectly illustrate the energy challenges in Sub-Saharan Africa (SSA) where only 43% of the population (76% of the urban population) has access to electricity (World Development Indicators). Although, SSA has experienced an impressive increase in energy demand over the last decade, grid connection rates lag behind the rest of the globe with, notably, the supply side suffering from high connection charges and weak cost-recovery.

In our article “Stacking up the Ladder: A Panel Data Analysis of Tanzanian Household Energy Choices” published in World Development, co-written with Pascale Combes Motel (CERDI) and Leonard Le Roux (University of Cape Town), we develop an understanding of the nature of household energy use in Tanzania in the context of the energy ladder and stacking (fuel mixing) hypotheses.

Most households present high levels of traditional fuel dependency, especially for cooking, and a particularly low level of reported reliance on electricity. There is also a significant level of spatial heterogeneity in dependence on both traditional lighting and cooking fuels, with the lowest rates found in Dar es Salaam (See Fig. 1 and Fig 2. where darker colours show a higher proportion of households relying on traditional fuels).

Expenditure data presented in Fig. 3 and Fig. 4 illustrate the notion of fuel stacking or mixing. The best-off households mainly cook with charcoal and mostly use modern lighting sources, but use a range of different fuels. 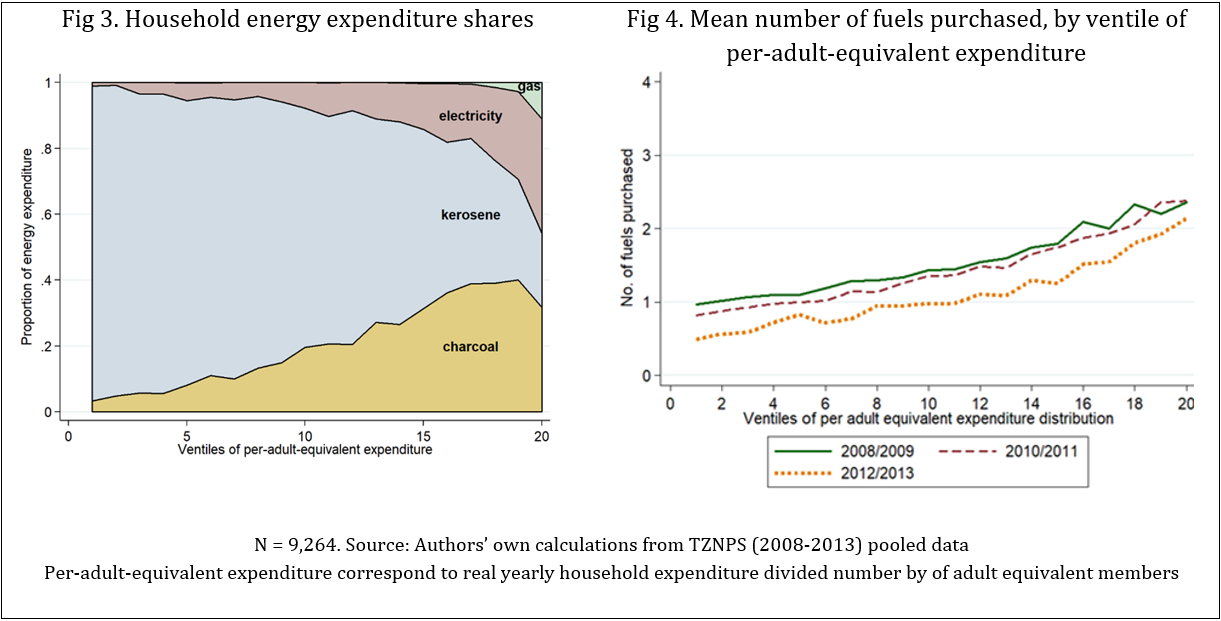 Can central and local authorities rely on prices to promote the energy transition to modern fuels? Our results show that the price responsiveness of households is greater for lighting fuels than cooking fuels. We find no significant own-price (and cross-price) effects on the choice of charcoal and firewood as the major cooking fuel. Our results partly support the idea that while fuel prices theoretically promote fuel shifts, this is unlikely when there are no alternatives.

Is fuel stacking desirable from a policy perspective? Consequences of fuel stacking may outweigh individual benefits. Reduction of household air pollution is likely to be modest in a fuel stacking context; and, fuel stacking can also deliver detrimental environmental outcomes owing to the deforestation pressure.

How should the use of cleaner technologies be promoted, especially by the poorer households? Policies which help households in funding or accessing credit to purchase electric and gas stoves might be useful in encouraging the use of clean fuels for cooking.

Failure to address the effects of rapid population growth, urbanisation and economic growth on energy demand will have massive implications in terms of human development and environmental degradation, in Tanzania and SSA in general. Our results show that Tanzanian households slowly stack-up the energy ladder but also that higher incomes and access to electricity are insufficient conditions for a transition towards modern fuels. Future research should thus investigate the potential for off-grid energy solutions. Finally, the charcoal sector should be better understood given that it is not only a major source of energy, but also a major source of livelihood in Tanzania.

Note: This blog post gives the views of the author, and not the position of the EDI Group.

Dr. Johanna Choumert-Nkolo is the Head of Research at EDI. Her publications are accessible here.